Hellmuth Hinz of The Arcturus Foundation 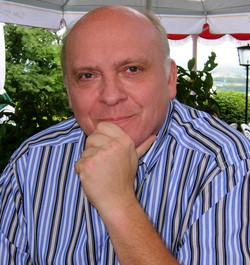 Dr. Hellmuth Hinz, N.D., Ph.D., L.M.T. earned his undergraduate degree from Marietta College in Marietta, Ohio, his masters degree at Ohio University and his Ph.D. in organic and biochemistry at the University of Cincinnati.  Following pharmacological and cell-biophysical postdoctoral studies at the University of Cincinnati Medical School, Hellmuth Hinz was actively involved in clinical phase I and phase II cancer research, with a focal point on the pharmacology and clinical development of new anticancer drugs.  During his time as a researcher, Hellmuth Hinz was able to publish scientific papers on promising anticancer drugs for his former employer, The Stehlin Foundation for Cancer Research in Houston, Texas.

Since 1985 Hellmuth Hinz has explored Western and Eastern health alternatives with an emphasis on studying the connection between manual therapies, nutrition, and the influence of the mind and emotions on one's health, gearing research efforts towards scientific integration of Western and Eastern healing modalities.  Hellmuth Hinz's decision to devote all of his time and efforts to alternative therapies.

Hellmuth Hinz is a state certified manual therapist and licensed naturopath.  He has earned a degree in naturopathy from Westbrook University and a Diplomat in Naturopathy from the National Board of Naturopathic Examiners.  He has received advanced training by the Upledger Institute in Craniosacral Therapy®, Somatoemotional Release®, and several other healing modalities.  He has acquired a background in traditional Chinese medical philosophy, as well as Western mobilization techniques.  He is a member of the International Association of Healthcare Practitioners, the ABMP and AMTA associations, and a full member of the scientific research society, Sigma Xi.  Hellmuth Hinz is the author and co-author of many articles published in scientific books and journals.  Since 1994 he has been devoting all his efforts to researching and developing CFI Therapy™ with The Arcturus Foundation